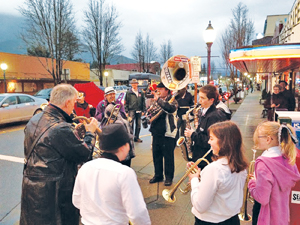 Musicians pause from the marching during a past Mardi Gras celebration.

Beads, yes. Hurricane drinks on the sidewalk, no.

But in North Bend it will be the traditional “laissez les bons temps rouler” when the Mardi Gras celebration takes to the streets at 5 p.m. March 4.

The event begins outside Boxley’s on North Bend Way. Kolke, as the lead “krewe” (Mardi Gras organizer), welcomes everyone to join the parade.

“We march around the downtown area,” he said. “We dress a bit wacky and play some fun music.”

This is the fifth year of the North Bend Mardi Gras celebration.

Like the traditional New Orleans wild party leading into the season of Lent, Kolke said the participants throw beads to passers-by and act a little crazy.

“We even tote Mardi Gras umbrellas, like they do in New Orleans,” Kolke said. “But I don’t think the New Orleans version is for the rain.”

He has high hopes that the parade this year will set a record.

The first year there were eight people in the parade. The group attracts newcomers each year, and in 2013, there were 30 participants.

You don’t, he added, need to be a musician to join the fun. Just show up and march with the group.

The parade continues until either 6 p.m. or when the cold weather drives the group into Boxley’s – whichever comes first. It’s usually the cold.

The Mardi Gras celebration will continue indoors with appetizers, a no-host bar and featured Creole favorites on the dinner menu. Dixieland jazz begins at 7 p.m.